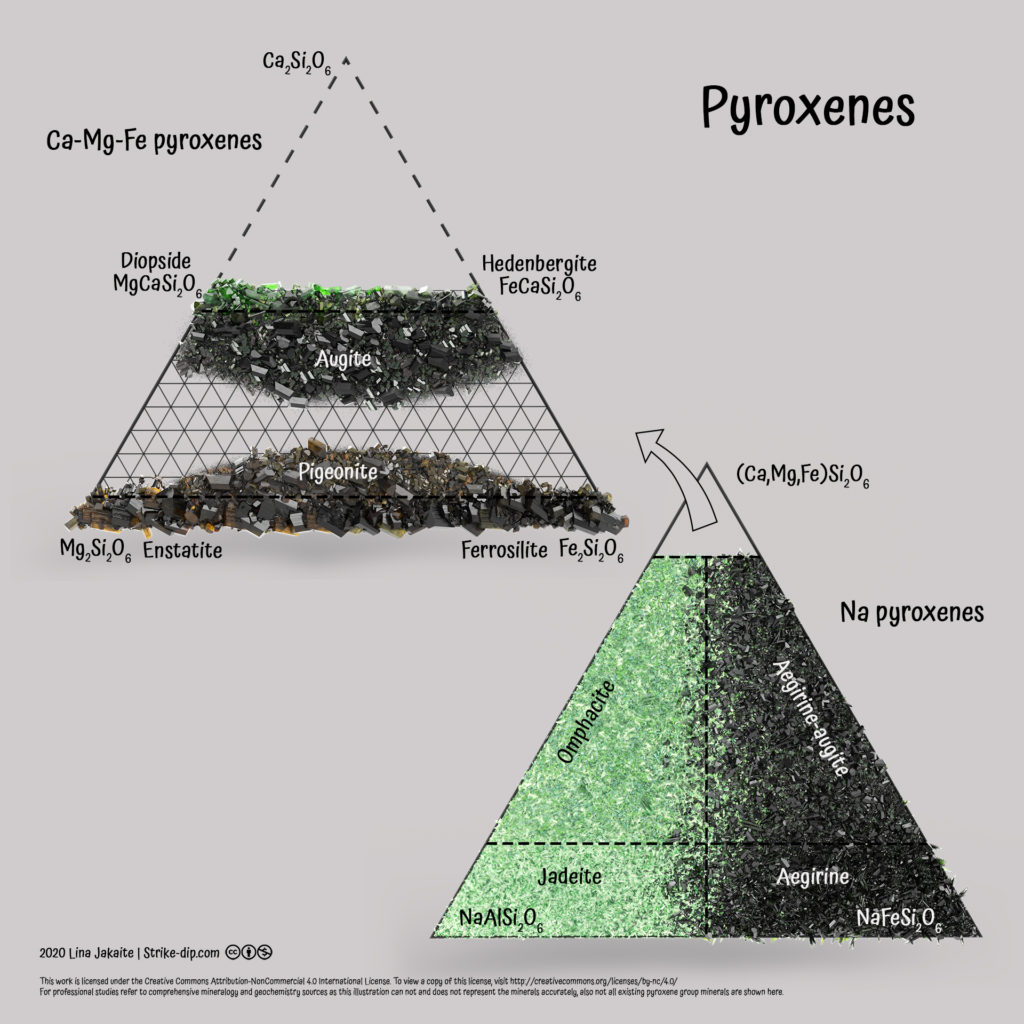 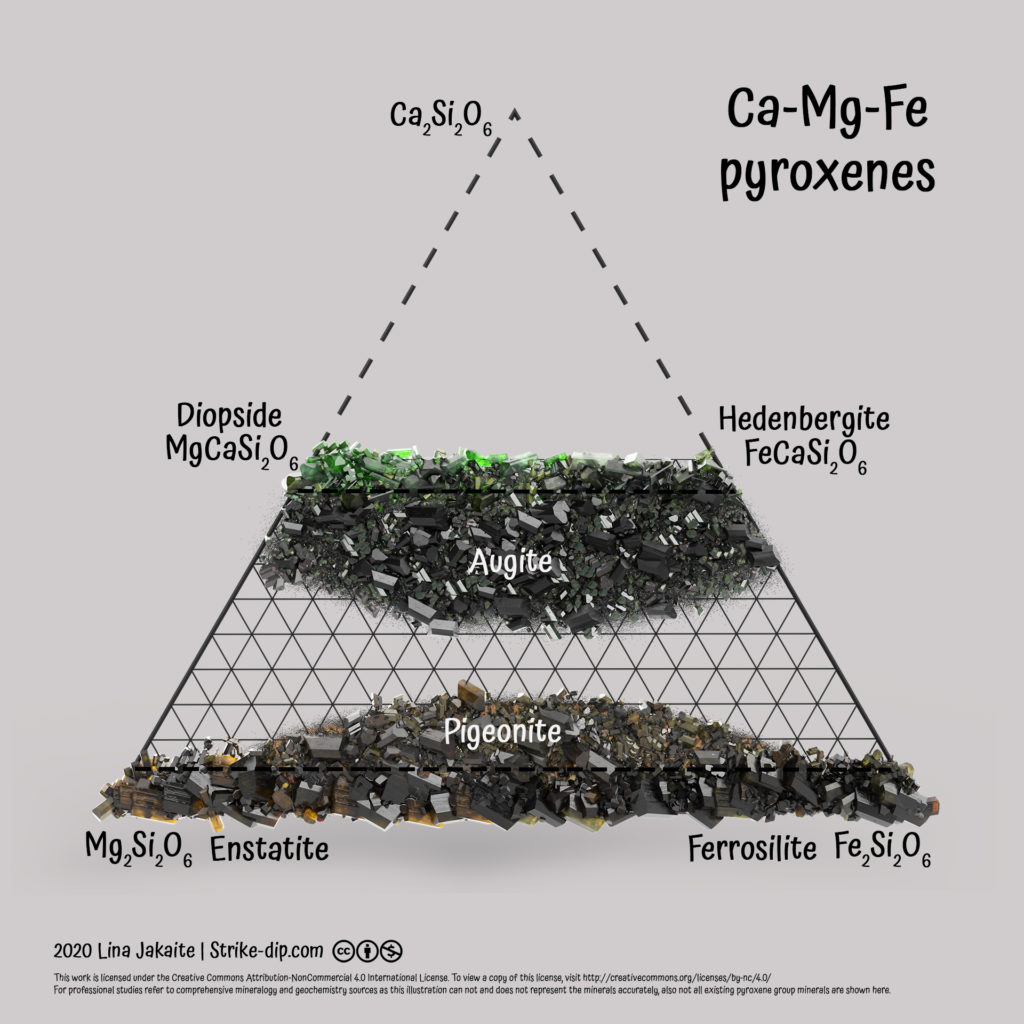 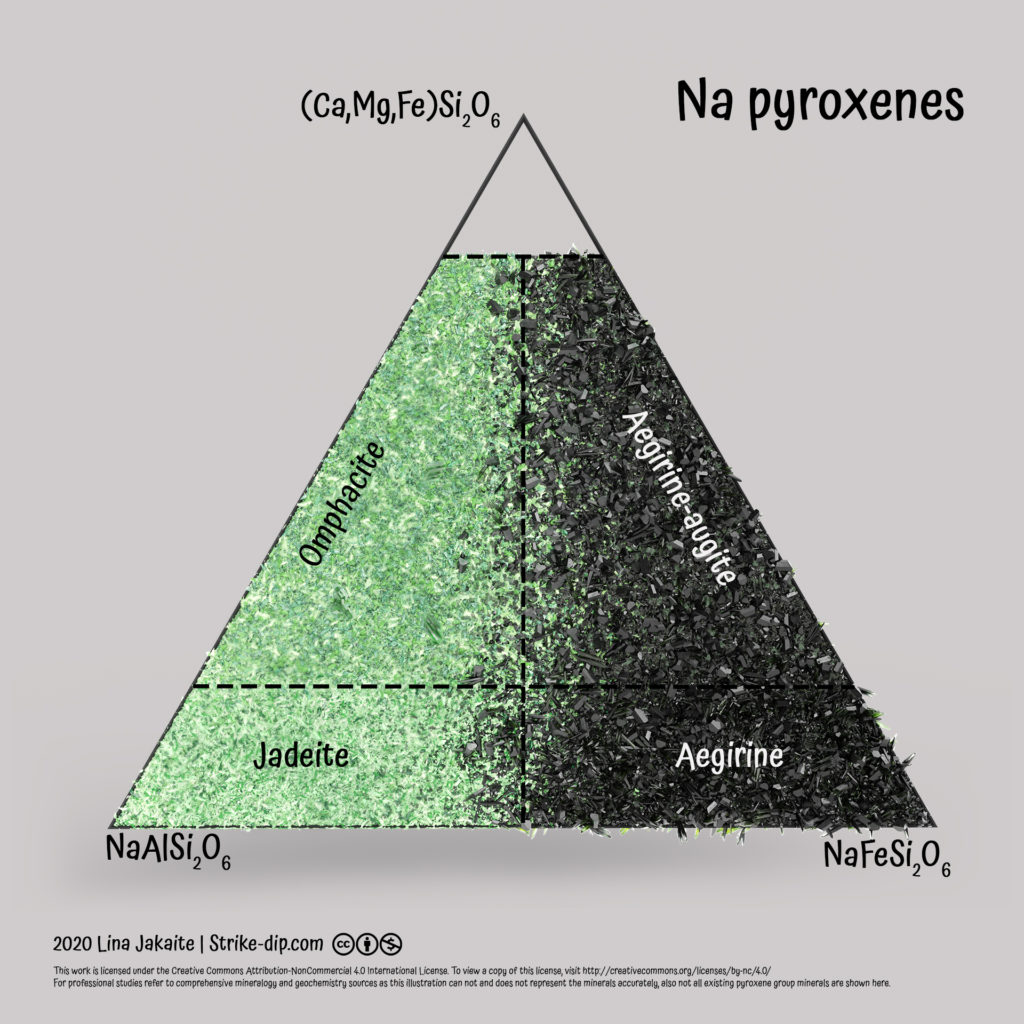 Pyroxene minerals are one of the most common minerals on Earth. The chemical composition of this group’s members can vary significantly, but generally it can be expressed as XYZ2O6. Where:

First diagram shows the solid solutions of Ca-Mg-Fe pyroxenes. The names of the minerals are defined based on the percentage of the end-members indicated on each peak of the triangle. However, pyroxenes with more than 50% of Ca2Si2O6 in composition does not exist in nature. So diopside (MgCaSi2O6) and hedenbergite (FeCaSi2O6) act as an end-members there.  Other two end-members in this diagram are enstatite (Mg2Si2O6) and ferrosilite (Fe2Si2O6). Pyroxenes with low-Ca content crystallize in orthorhombic symmetry, thus low-Ca minerals enstatite and ferrosilite, shown on the very bottom of first diagram (area up to 5% Ca2Si2O6) are also called orthopyroxenes. Other pyroxenes crystallize in monoclinic crystal system and are called clinopyroxenes. Low and high-Ca minerals are separated my miscibility gap.

Another diagram illustrates sodic pyroxenes. End-members there are jadeite (NaAlSi2O6) and aegirine (NaFeSi2O6). If minerals contain MgCaSi2O6 – FeCaSi2O6 – Ca2Si2O6  from 20 to 80 %, then the sodic pyroxene is either omphacite or aegirine-augite. If Mg-Fe-Ca content increases even more, then the pyroxene is defined not as a sodic, but as a Mg-Ca-Fe pyroxene, and the first diagram should be used to define its name.

Only the most common pyroxenes are illustrated there. There are a lot more pyroxenes present in nature (like varieties containing, Li, Mn, Cr, V and other) which are not shown and described there. Also the shown ones can not and does not accurately represent the whole color and mineral form variety. These images, obviously, are not for professional use but rather for fun or as a beginning point to study pyroxenes.

High resolution digital and paper posters, as usually, there: https://gumroad.com/linajakaite